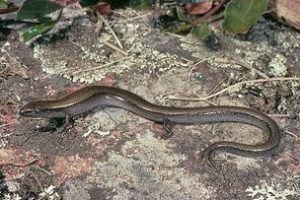 Habitat: Common in NSW and Queensland and Victoria, the Three-toed Skink is widely distributed in the cooler, damper areas. It lives in moist litter, as well as below rocks and fallen timber.

About: The skink is rarely seen unless sought out, is active at night, and feeds on insects. The lizard has attracted scientific attention due to its dual reproduction habits of producing young via eggs in coastal populations, or via live young in colder mountain regions: Wikipedia