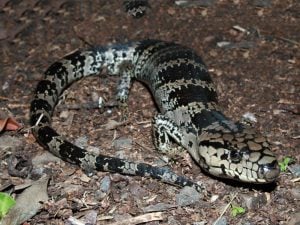 Habitat: Eastern coast up to tropical Queensland. Found in wet sclerophyll forests and rainforests as well as moist areas in woodlands

About: They shelter beneath leaf litter, in hollow logs and crevices of rocks and trees. Main diet consists of snails and slugs, for which they forage during twilight hours and at night in summer and also during the day in cooler months. When threatened, it raises its body off the ground to appear larger and flickers or vibrates its tongue rapidly similar to snakes. Source: Wikipedia