In spite of the awful weather on Saturday there was a good turn out for a guided walk through the magnificent Mambo wetlands. Many of us will have seen the signposts for the wetlands in and around Salamander Bay, but I think few of us had little idea that this is a very large and significant area of old growth bushland. It supports a diversity of wildlife not the least of which is the local koala population. 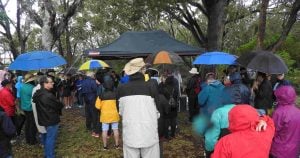 Recently there was a sell off of a parcel of land which is part of Mambo Wetlands by the Department of Education (no less). In spite of protest letters and petitioning by community groups, the sale encouraged many concerned residents to protest at the possibility of development on such prime wildlife habitat. All this happened even though our local NSW member, Kate Washington, reported that in addition to the petitioning there were philanthropic bids for the property too, which could have secured the site for future generations.  It is hoped that the land can be bought back into public ownership, or at least no development of this vital wildlife area occurs. 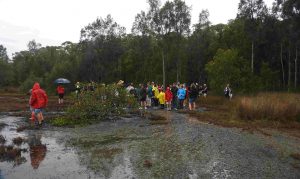 One group on the mambo wetland walk

Koala in a Paperbark Tree
Scroll to top