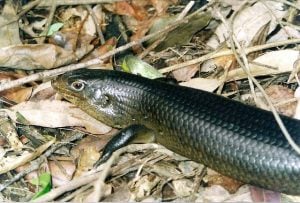 Description: Glossy black with a pale rim to the eye

Habitat: Generally restricted to the rainforest of south-eastern Australia. They favour habitat with many fallen logs, and it remains in close proximity to these. It is less frequently found in other types of environments, such as the open eucalypt woodland.

About: The unusual name comes from the pungent, fishy odour emitted when threatened.