NEWS
You are here: Home1 / NEWS2 / News3 / Hidden Gems of the Tilligerry Peninsula

On our beautiful Tilligerry Peninsula we are surrounded by a vast array of natural vegetation that we greatly admire, the magnificent eucalypts, banksias, flannel flowers and Christmas bush and bells to name but a few, but out there, small and hidden away are other true gems of the bush, our native terrestrial or ground orchids.

When we think of orchids, most of us will automatically think of the large ones we see in a florist and perhaps are lucky enough to have been given one as a present in a pot. But the ones in our bushland are small, highly specialised and come in many shapes and forms, their common names often describing the diversity of their appearance e.g. Duck, Donkey, Bearded, Greenhood, Helmet and Pixie Caps. They also come in many colours e.g. the pretty Lady Finger Orchids might be pink, purple, blue or white. 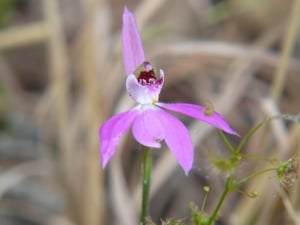 Most of our ground orchids are deciduous and having been dormant during summer begin to put up leaves from their underground bulbs at the end of summer. As autumn progresses into winter more and more of these delightful orchids begin to form their flowers and a walk in the bush to find them can become a real treasure hunt.

Over the past 16 years hunting for ground orchids has become a passion for several of my nature watching friends but in particular for fellow nature watcher Allison and myself.

Thanks to Allison, who has had years of experience in identifying native orchids, we have discovered that our peninsular has the remarkable total of nearly 70 species. Some are common and very numerous but others may be found in only one location and may consist of a solitary plant. A few species we have found here are on the endangered list, making the extensive data bank that Allison has created of great importance for any future researchers. 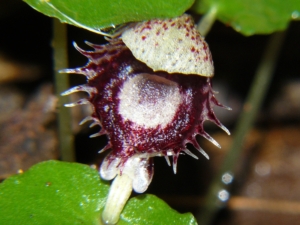 The vast majority of Tilligerry orchids are terrestrial or ground orchids, all amazingly adapted to their location and their various pollinators. For example, the genus, Cryptostylus or Tongue Orchids imitate a female Icheumen wasp and are pollinated when the male is deceived into thinking he can mate with it. Others actually trap unsuspecting insects into their flowers.

Bees, ants gnats, mosquitoes and moths are among the many other insects that are attracted to orchid flowers by smell, colour, nectar or shape.

Apart from the ground orchids we have found two other categories of native orchid on our peninsular, a leafless terrestrial orchid and two epiphytic orchids. 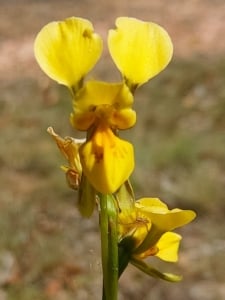 Leafless terrestrial orchids rely for their survival on a close symbiotic relationship with mycorrhizal fungus in the soil. They are saprophytic, i.e. they derive their sustenance from decaying wood or leaf litter. The name of the one in our area is Erythrorchis cassythoides or Bootlace orchid which climbs metres up trees and, as its name suggests, has stems that resemble a black bootlace.

The Epiphytic orchids found here are Cymbidium suave or Snake Flower and Dockrilla teretifolia or Bridal Veil orchids. The former is very rare on the Tilligerry with only one specimen found so far and the latter is common, growing on Casuarina glauca trees along our waterfronts. Epiphytic plants attach themselves to other plants or rocks but are not parasites.

On our Tilligerry Habitat Reserve last year I recorded and mapped 16 species of orchids. They can now be monitored on an annual basis when in flower which is mostly through late winter and into spring. In our orchid greenhouse in the Nursery, we have at least three more different species, making it a total of 19 species under our care. 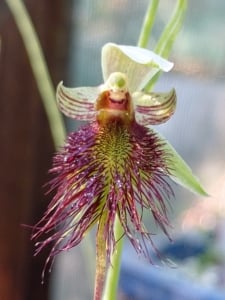 A total of 7 species of ground orchids are thriving in the orchid greenhouse and some of these will be suitable to plant in our Reserve at the end of the year. We have already successfully transferred some orchids from the greenhouse into the Reserve on a trial basis so are excited at the prospect of providing a home here for more of these precious gems of the bush.

So, let me encourage you to tread carefully in the bush and keep your eye out for these little wonders of nature. But be careful, you might get hooked and become addicted to the treasure hunt. —- Jenny