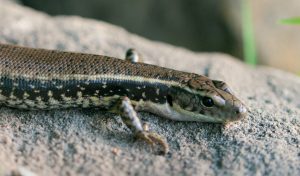 Habitat: Ranges from southern Victoria to central Queensland. Usually found close to or on the shore of slow flowing creeks and estuaries

About: On the larger side of the members of the skink family, the Eastern water skink eats insects such as spiders and beetles and other invertebrates such as worms. Source: Wikipedia