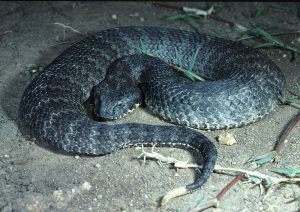 Habitat: Common death adders are found in forests, woodlands, grasslands and heaths of the eastern coast of Australia. The death adder is a master of camouflage, due to its band stripes, hiding beneath loose leaf litter and debris in woodland, shrubland and grassland.

About: Dangerous; It is one of the most venomous land snakes in Australia and globally. Death adders possess the longest fangs of any Australian snake. Common death adders eat small mammals and birds as a primary diet. Unlike other snakes, the common death adder lies in wait for its prey (often for many days) until a meal passes. It covers itself with leaves—making itself inconspicuous—and lies coiled in ambush, twitching its grub-like tail close to its head as a lure.

It can deliver the fastest strike among all venomous snakes recorded in Australia. Human death can occur within six hours after the bite.