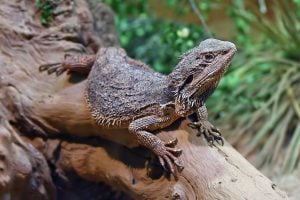 Habitat: Generally restricted to the rainforest of south-eastern Australia. They favour habitat with many fallen logs, and it remains in close proximity to these. It is less frequently found in other types of environments, such as the open eucalypt woodland.

About: Eastern bearded dragons are diurnal (like humans – sleeping at night and active in the day) They are semi-arboreal and perch on exposed places such as tree branches or logs, retreating to lower and cooler places when too hot. When threatened, it inflates its throat and displays its beard. If further provoked, it opens its mouth to display the bright yellow colour of the lining of its mouth. The eastern bearded dragon feeds on a variety of small animals, including mice, smaller reptiles, and insects.  Source: Wikipedia