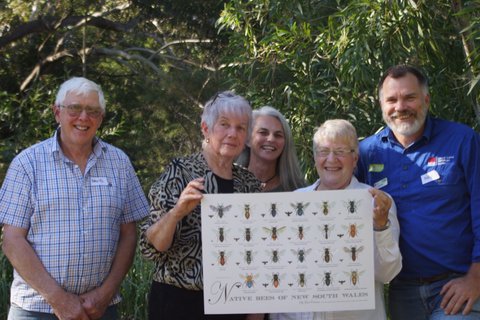 A very successful workshop was conducted on Backyard Beekeeping by Dorothea Willey, David Gear and Gina Cranson on May 14th, with 21 people attending.

David is a well known and respected former breeder of queen bees, which he exported worldwide.

Gina is a writer, editor and illustrator having illustrated a comprehensive range of native bees.

Dorothea is a hobbyist beekeeper and a Habitat volunteer

David opened the presentation with a history of how honey bees came to Australia and how modern day hives came to their present form. Also explaining the anatomy of a bee and how it develops from egg to mature bee, and the “castes” or division of labours among the bees. The role of the queen bee was of particular interest as she has the ability to determine the gender of the egg she lays, and also whether any female eggs will be fertile.

Morning tea was served, with the majority of the food provided having honey as an ingredient which was enjoyed by all.

The following session dealt mainly with the subject of biosecurity, jointly delivered by David and Dorothea. The main threat to local hives is the small hive beetle, and its incidence and control formed the basis for a lively discussion. The importance of maintaining a strong hive, that is one that has a large population of bees, was noted as being extremely important as this assists the bees to maintain control of their environment and therefore be less likely to develop serious problems with infestation or disease.

Local flora that is “bee food” was of considerable interest. As bees collect both pollen and nectar, it is important that a variety of flora be available in good numbers.  Angophora costata, the Leptospermum polygalifolium (jelly bush), Banksia varieties, and Callistemon (among others), which occur on the Tilligerry Peninsula  particularly in Tanilba Bay are excellent examples.

Gina Cranson gave an extremely interesting talk on Australian native bees and how she came to not only in illustrate them, but research their anatomy, how they live and forage, and whether or not they produce honey.

Gina informed us that there are as many as 1600 species of Australian native bees, that only 11 of these species are stingless and produce honey in very small quantities, perhaps a 500gm jar a year. Most native bees are solitary bees, and live in holes in the ground, wood, bamboo canes, and similar habitat which a person can provide in their own garden to assist in attracting these bees. Native bees are efficient pollinators of a variety of flora, including macadamias and cherry tomatoes.

Gina also had on display and for sale, her beautifully illustrated posters of the native bees of NSW and the Hunter Region. Gina also donated a poster of Hunter Native Bees to Tilligerry Habitat. 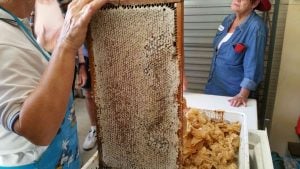 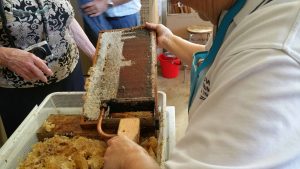 Following lunch, a field trip to Dorothea’s home to observe a working hive and extraction of honey was arranged. An outdoor area fully enclosed by insect screens proved to be a perfect place for participants to view the brood and honey frames taken from the hive. Dorothea demonstrated how to uncap a frame of honey and invited participants to taste the honey before it was spun from the frames, which most people would not have seen (or tasted!) before.

Participants were fascinated to observe how the honey had the appearance of “fairy floss” on the side of the extraction centrifuge, how it collected at the base of the drum, and then flowed through a series of filters (each successively smaller), to finally end up in the pail in which it is then sold.